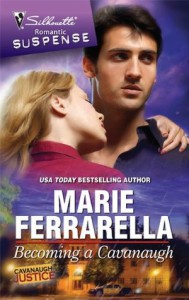 A gruesome killing spree hits the streets of Aurora

Someone was murdering the city's elite, and anyone could be next. Assigned to the case was Detective Kyle O'Brien, whose new partner was the blond, blue-eyed Jaren Rosetti, as sunny as Kyle was dark. Not to mention too irresistible for her own good. But their growing attraction had to be pushed aside as the horrific killer swept through the urban landscape. Kyle knew he was falling hard for his obstinate partner, who had a will of her own. While they deciphered the psychopath's code, the killer prepared to strike again -- this time dangerously close to home.

Another exciting visit to Aurora, California. Detective Kyle O'Brien is having a rough day, which only adds to the rough several months he's been through. His partner of five years has retired, leaving him stuck with a new one. For a man who doesn't like to talk, and prefers to work in quiet and alone, a bubbly chatterbox is his worst nightmare. Jaren has had difficult partners before, but Kyle is one for the books. He may be a tough nut to crack, but she's willing to be patient.

Kyle has been having a hard time dealing with the bombshell that his mother dropped on him and his siblings just before she died. Far from being the children of a war hero, as they'd believed all their lives, it turned out they were the children of a cop who hadn't married their mother because he already had a wife and family. This has thrown his whole sense of who he is into turmoil. To top it off, his father was part of the Cavanaugh family, a family that has embraced them rather than rejecting them. Trying to cope with all the changes seems to have put him in a permanent bad mood. Dealing with Jaren is just one more pain in his butt. It was rather amusing to watch him try to handle her perpetually sunny attitude. He wasn't convinced that she could handle the types of cases they saw, but he didn't have any choice in the matter.

Jaren left the Oakland police department to come to Aurora after her father died. She no longer had anything to keep her there and was looking forward to a fresh start. She is used to people not taking her seriously until they get to know her, so Kyle's attitude isn't really a surprise. I loved her determination to tough out his treatment of her and earn his respect. It was also fun to see her purposely push some of his buttons.

I really liked seeing their relationship go from unwilling partners, to tentative friends, to much more. I loved seeing their differing investigative styles adapt and adjust to working with each other. It really made a point about how men and women look at things. Kyle rolled his eyes at some of the scenarios she came up with on their latest case, but as the investigation went on, he ended up having to admit she knew what she was doing. The more time that they spent together, it also became obvious that there was an intense attraction between them. They really try to resist, but Kyle finds her getting under his skin. I loved seeing the way that her lack of family got to him, considering that he often felt that he had too much of it. Their attraction is just part of the connection that Jaren feels to Kyle, and as the case goes on it just gets stronger. Opening her heart to those feelings is something she resists because the pain of loss is something she doesn't want to experience again. When everything was over, Kyle had something to say, but he didn't do it very well. I loved seeing Jaren then have to track him down to have her say.

The case they were working on was intense and creepy. Someone was going around killing people as if they were vampires, driving wood stakes through the victim's heart. The team had a hard time figuring out what the connection was between the victims. I liked seeing the way that Jaren's mind worked and the theories that she came up with. One of the victims made solving it very personal to to the police, and the ramped up intensity kept me glued to the pages. I got really frustrated with Jaren when she ignored Kyle's directive that no one go off on their own to investigate, as I could see that things could go wrong very quickly. The ending was heart-pounding as I wondered how close the danger was going to get. I loved seeing it all come together.

Once again, the Cavanaugh clan plays a huge supporting role in the story. I loved the way that Kyle dragged Jaren to Andrew's house for a meal, and how Jaren quickly became part of them. I loved seeing how Kyle was still trying to adjust to being part of the family, and how their support became so important to him when Jaren ended up in the hospital.