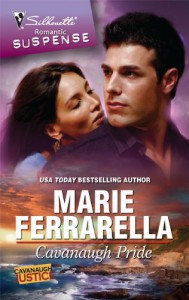 "I don't want to be alone tonight."

Julianne White Bear prided herself on never needing anyone. Ever since the detective teamed up with fellow cop Frank McIntyre, she found herself opening up. The proud, irresistible member of the Cavanaugh clan clearly didn't want her invading his territory. But both were helpless to resist their simmering attraction....

Frank needed to find out what drove the beautiful loner--it was obvious Julianne had a secret past. Now their hunt for a serial killer threatened her future. All Frank wanted was to keep Julianne safe. How could they predict the passion that swamped their senses, exposing them to feelings far more dangerous?

Very good book with plenty of tension, both personal and professional. Julianne is a detective in a neighboring town. When the death of a woman there matches those of a serial killer in Aurora, she is sent to work with the Aurora department's task force. She immediately clashes with Frank, who isn't thrilled to have an outside officer assigned to his group.

Frank is dealing with a lot of frustration over the lack of progress in finding the killer. He first takes Julianne's presence as an indictment of his work, though a conversation with the chief of detectives relieves him of that worry. Then he has to face the unwelcome attraction he feels for Julianne. Getting involved with a coworker would be a very bad idea.

Julianne isn't going to sit back and let Frank dismiss her or her abilities. She doesn't expect special treatment, but she won't be ignored either. What she hasn't told anyone is that she also has a personal reason for being there. Her younger cousin left home and Julianne has traced her to Aurora. She's determined to find Mary before something bad can happen to her. Julianne had grown up with parents who never showed affection to her or each other. Her best friend was her cousin Mary, who was living with a secret no one should have to deal with. She feels responsible for Mary's disappearance.

I loved the relationship that developed between Frank and Julianne. Frank has a reputation as a ladies man and Julianne wants no part of it. He's attracted to her, but determined to resist. He's also intrigued by her. He sees a woman who is strong and independent, but who also has a lot of pain in her eyes. She keeps to herself and resists his attempts to get to know her. Though they clash at first, working on the case together, they make an excellent team. I loved Frank's persistence as he finally got Julianne to tell him about Mary, and his support of her when Mary became one of the killer's victims. Julianne's walls start to crumble under his attentions, but the things she begins to feel frighten her. She's never before allowed herself to depend on someone else. Frank is also taken aback by the strength of his feelings for her. I loved seeing him admit his vulnerability, and also his determination to see where it might lead. He had his work cut out for him in the end as he tried to convince her of his love. Julianne had to decide if she was willing to trust that he would always be there for her.

The search for the serial killer was really well done. The team's frustration was obvious as they tried to find the link between the victims. There was a terrific scene with a visiting profiler that really showed Julianne's abilities to her new teammates. It was interesting to see the way that they would start over with each new victim, trying to find the connections. I really liked seeing how it was an unexpected bit of trivia that finally cracked the case. Julianne's undercover sting was intense, and what happened to her kept me on the edge of my seat until it was all over. I loved how it was all resolved.

I really enjoyed seeing Andrew Cavanugh bring another lost soul into the Cavanaugh circle. Julianne tried really hard to avoid getting involved with them, but no one can stand up to him for long. It was really sweet to see the way that she got sucked in at the anniversary party without really realizing it until it happened. I loved Frank's big moment at the end, and Andrew's satisfaction at witnessing it.