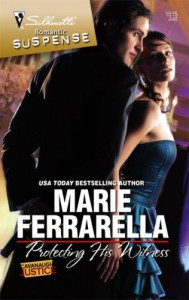 The woman had secrets no cop could ignore

Undercover police officer Zack McIntyre couldn't make sense of the beautiful, mysterious stranger who had saved him from death. She cared for him with skilled, gentle hands, awakening passions within him, but her haunted eyes spoke of secrets, lies and terrible fear. And he knew he couldn't rest unless he kept her safe from harm--and made her his own.

Endless months in the shadows, hiding from a killer, had taught Dr. Krystle Maller to trust no one. This strong, compelling man made her long to take shelter, just for a little while, in the circle of his arms. But could she trust even him with her deadly secret?

Very good book. Zack is on an undercover job when he gets shot. Desperate to get away from those who are after him, he ends up collapsing outside Kasey's back door. Startled by the body blocking her door, her medical oath won't let her ignore him, but neither can she bring herself to call the authorities. So she takes him into her home and treats his injury, determined to send him on his way as soon as she can. When Zack regains consciousness, he's grateful for the beautiful woman who saved his life. In spite of the pain he's in, he can't deny the spark of attraction he feels for her. He also gets the feeling that she is hiding something from him.

There was an instant connection that Kasey and Zack felt to each other, but each of them had reasons to resist. Zack has kept himself from getting close to any woman because he fears that he might be like his father, who had physically and emotionally abused his family. So Zack keeps his relationships casual. Kasey is on the run, hiding from the mob boss who wants to kill her. She and her fiance had witnessed him murdering another man. Then, while under police protection, a dirty cop had killed her fiance and gone after her. She left behind her job and identity as a doctor, going so far as to stage her own death. Now she spends her time looking over her shoulder, always ready to run again.

I loved seeing Zach's protectiveness as he became more aware of Kasey's fear. He was sensitive to her skittishness, and tried very hard not to rush her with his interest in her. But he also wasn't shy about letting her see that she had an effect on him. I also liked seeing the effect that his interest had on Kasey. She had kept herself so closed off and so hyper-alert that having the interest of a strong and protective man made her want to lean on him for just a little while. She also found it increasingly difficult to resist her desire for him.

Things started getting really interesting when he invites her to his mother's wedding. Until that time, Kasey had no idea that Zack was a police officer, and that his mother was marrying into a family heavily involved in law enforcement. I loved seeing how all the Cavanaughs so readily accepted her. She was really worried at first about being surrounded by so many cops, but relaxed when she realized that she would be safe from any attacks while there.

When Zack decides to run a check on her fingerprints and turns up some unexpected information, he is hurt and angry that she didn't trust him. But he doesn't let that stop him from doing his best to help and protect her. Things got really intense at the end when her past shows up at her door, determined to finish what he had started. I loved seeing her fight back, holding her own until Zack arrives. The ending was fun, with Zack's brother Frank providing some lighter moments to relieve the tension.

As always, the Cavanaughs are the epitome of a close knit family. Andrew likes nothing more than taking care of all of them. He also discovers that their black sheep brother had had another family that they knew nothing about. I loved seeing him draw the new members into the fold. He also makes sure that Zack and his siblings know that, even though their name is McIntyre, they are also part of the Cavanaugh family now.