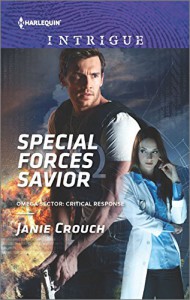 He has to shut down the terrorists or lose everything. Including the woman he can't admit means the most to him.

Omega Sector: Critical Response agent Derek Waterman is hunting the architects of a lethal terrorist bombing. After weeks of chasing cold leads, he has finally found the evidence that could expose the perpetrators. But in order to take them down, he needs help from Dr. Molly Humphries, Omega's lead forensic scientist.

Shy Molly works to retrieve the data--and overcome her debilitating crush on the sexy agent. Derek carefully suppresses his mutual smoldering attraction, sure that his dark past will drive Molly away if she knows. But when Molly's kidnapped, he will stop at nothing to save her. Even if a lethal enemy will do everything to keep him from doing so.

Good mix of romance and action. Derek and his fellow agents Jon and Liam have been working hard trying to find out who is behind a recent terrorist attack, but every lead so far has been a dead end. Then they find some evidence that could be just what they need, if someone can recover the data. This is where Molly comes in. She is the lead forensic scientist for Omega Sector and brilliant at what she does.

I loved Molly. She is fantastic at what she does, but she is also a bit shy and especially awkward around Derek. She has had a crush on him for years that has her stuttering and stumbling whenever she is around him, and that really frustrates her. But there's little she won't do for him and she promises to work on his project as soon as she can. She and Derek had had a fantastic night together three years earlier, but ever since then Derek has kept his distance. She's not sure he even remembers it.

I liked Derek too. He is just as attracted to her, but is determined to protect her from getting involved with someone like him. He is very protective of her, and I really enjoyed how he fussed at her about eating and also at his friends for their teasing. He cares about her, but doesn't want his past having an effect on her.

Derek's feelings for Molly become obvious to everyone when there is an explosion at the lab and then she is kidnapped. I loved the look at the methods used to find her, and the intensity of Derek's determination. The rescue itself was exciting and Molly really showed how strong she was. When they return it is to discover that Molly is still being targeted, and Derek's protective instincts continue to show. As much as Derek wants to keep Molly safe from others and from himself, Molly is equally determined to show Derek that who he is now is different than the one that haunts his dreams.

The suspense of the story was great. Derek, Jon and Liam's frustration is obvious as all their efforts come to nothing. I could feel their excitement when they found that one piece of evidence, and their confidence that Molly would be able to get the necessary information. The lab explosion and Molly's kidnapping ramped up the intensity, as did the bad guy's attempt to frame Molly for it. It was pretty clear from the beginning that there was someone on the inside working against them, and following along with the investigation kept me hooked. There was an unexpected twist at the end that brought more danger to Molly and some intense action before it was all over. I'm looking forward to Jon and Liam's stories.