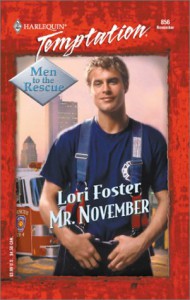 Series: Men to the Rescue (Book 5)

SHE NEEDED HIM FOR A GOOD CAUSE

Amanda Barker had to have firefighter Josh Marshall. With his sexy body, killer smile, and incredible reputation as a lady's man, he'd sell a million of her fund-raising calendars. But Josh wasn't cooperating, and he wasn't playing fair....

HE NEEDED HER FOR...OTHER GOOD THINGS

If there was one thing Josh knew, it was that where there's smoke there's fire. And Ms. Amanda Barker was smokin'. Over and over, he'd refused her requests to pose for a calendar, but she wouldn't take no for an answer. And neither would he when he laid out the rules: he'd agree to meet her needs, if she agreed to meet his....

Very good book. He is one of Zack's friends in Treat Her Right, and well known as a ladies man. In that book he complained about a woman who is relentlessly pursuing him to get him to pose for her charity calendar. That pursuit continues in this book, as Josh does his best to dodge her request. But when she tracks him down and follows him into the fire station locker room, he has something other than the calendar on his mind. So he makes a bargain with her - he'll pose for her calendar if she'll go out with him.

I liked Josh. It was pretty funny to see a guy who is so into his playboy lifestyle be so reluctant to flaunt his attributes. But it turns out that there's more to Josh than we've seen before. He's not real happy to be looked at as a sex object rather than be appreciated for the job he does. But it's a good cause, and if he can use it to get closer to Amanda, that's what he'll do. It's not going to be as easy as he thought, because under her prissy exterior is a woman who is determined to deny herself what he is offering.

Amanda has issues from her past that have her spending her free time paying for what she sees as an unforgivable mistake. She sees herself as unable and undeserving of what Josh is looking for. Her earlier experiences with men have only served to strengthen those feelings.

I loved the development of their relationship. Josh quickly catches on that there is more to Amanda's resistance than he had thought. It was sweet to see the way that he backed off and tried to get her to tell him what was wrong. Amanda was convinced that when he knew her secret he would be gone, and was stunned when she was wrong. His reaction to what she had gone through was a huge burst of protectiveness. I loved his plan on how to solve her problem, and his patience as they worked through it. Amanda was surprised at what a difference it made once the pressure was off, and they had a chance to get to know each other. It was fun to see her reactions at the calendar launch and she had to witness the women's reactions to Josh. There's a small bump in the road of their relationship when Josh appears to be distracted at work because of her, and a fire call feeds some of Amanda's fears. The ending was hot and romantic as Amanda breaks free of her past and Josh finally finds what he's been searching for.

I loved having Mick and Del, and Zack and Wynn have appearances in this book. After all the teasing that Josh laid on them, it was really fun to see him on the receiving end. It was also wonderful to see their concern for him. Seeing all three couples happy together in the epilogue was a great wrap up.