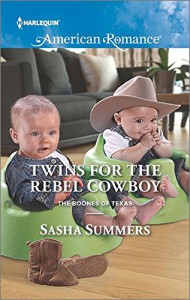 For one crazy night, Annabeth Upton lets loose to forget her worries: Grandma Flo's medical bills, little Cody's stutter, the challenges of being a school principal and a single mom. Then Ryder Boone steps in to protect her from a rowdy bar patron…and in a hot half hour they create the biggest worry of all. Two of them, actually!

Ryder was always the rebel of the Boone family, but he does the right thing and proposes. Annabeth says yes -- but thinks the marriage is temporary, meant to save her from scandal. The last thing she wants is to force Ryder into a loveless marriage forever, so she gives him an opt-out clause. The only problem is that as they grow even closer, she doesn't want him to leave!

Good book. Annabeth had been having a really bad day when she stopped in a bar to get out of the storm. She's being hit on by a pretty aggressive customer when Ryder arrives and steps in. Something sparks between them, and a moment of madness in the front seat of his truck has long lasting consequences.

Widowed Annabeth lost her husband to the war six years earlier, shortly before her son was born, and she has been raising him mostly on her own. She also cares for the grandmother who raised her after her own parents died in a car crash. Between taking care of Cody and Flo and her job as principal, she's really busy. She and Ryder have been friends all their lives. He was also her husband's best friend, and has been part of her life since Greg's death. She never expected the burst of attraction that resulted in an unexpected pregnancy. A scandal like that could cost her her job.

Ryder has always cared for Annabeth, but his buddy Greg got to her first. Since Greg's death he has tried to look out for them, the way Greg would have wanted, but Annabeth's independence makes it difficult to do much. When he finds out about her pregnancy he's determined to do the right thing and proposes. Being married will make it much easier to care for her. He doesn't expect her to accept his proposal as a temporary measure.

I liked Annabeth, but I did get a bit frustrated with her at times. She's a strong woman who has been through a lot and has learned to depend on herself. She's a terrific mom who worries about her son but also takes the time to have fun with him. I loved her relationship with her grandmother, and her patience when Flo's memory starts to slip. When she found out she was pregnant, she was determined that she would not trap Ryder in a marriage he didn't want. She'd heard him say that he wouldn't marry, and knew he had a job offer in Dallas, so she made it clear to him that she only expected a temporary marriage.

I loved Ryder. He has had a reputation as a rebel, thanks to his early years. He had never really fit in with the ranching side of his family and as a result had tended to rebel by getting into trouble. His mother died in a car accident on her way to get him after one of those episodes and he has carried a lot of guilt about it ever since. But in the last few years that lifestyle has lost its appeal and he has started to settle down. I loved his protectiveness toward Annabeth and his determination to take care of her. He was surprised by her plan for a temporary marriage as his intention was for a real and permanent one.

I loved seeing their relationship develop. Ryder doesn't push his intentions on her, but he's determined to show her what they could have together. It was really sweet to see the way he notices the little things that make her happy. I loved how he's always there to support her, even when she thinks she doesn't need it. I felt for him because he never seemed to be able to find the words to tell her how he feels. Annabeth started out determined to keep from depending on Ryder, sure that he would be ready to leave by the end of the school year. It didn't take long for her feelings to start to change from friendship to something more, but she was afraid to believe that he could feel the same way. In her fear she kept pushing him away. I loved seeing them both finally find the courage to confess their feelings. Ryder's surprise for Annabeth at the end was really sweet.

I enjoyed some of the secondary characters and the way they added to the story. Annabeth's grandmother, Flo, was quite a hoot. I felt bad for the health issues that she was having, but when she was "all there" she was great. I loved her part with Ryder when he went to see her. Cody was a great kid who was a lot more observant than Annabeth knew. I loved the support that both Annabeth and Ryder got from his family, and how he finally started to feel part of them again. I think my favorite was the kitten Tom. The scene with him after his encounter with the skunk was hysterical.