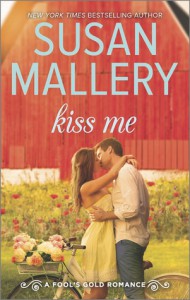 After Phoebe Kitzke's kind heart gets her suspended from her job in LA, she swears off doing favors -- until her best friend begs for help on the family ranch in Fool's Gold. Unfortunately, sexy cowboy Zane Nicholson isn't exactly thrilled by the city girl's arrival.

Thanks to his brother's latest scheme, Zane has been roped into taking tourists on a cattle drive. What Phoebe knows about ranching wouldn't fill his hat, but her laughter is so captivating that even his animals fall for her. One slip of his legendary control leads to a passionate kiss that convinces him she's exactly the kind of woman a single-minded loner needs to avoid.

In his arms, Phoebe discovers she's a country girl at heart. Yet no matter how much the small town feels like home, she can't stay unless Zane loves her, too…but is this cowboy interested in forever?

Very good book, mainly about Phoebe and Zane, but also with some terrific secondary characters. It begins with Zane, owner of Nicholson Ranch, and older brother/guardian to seventeen year old Chase, discovering that Chase has advertised a cattle drive vacation for tourists and accepted reservations and payments. The circumstances of how this came about, and Chase's attempts to deal with it are pretty amusing to the reader, but definitely not to Zane. Zane is furious and determined that Chase will face the consequences.

Phoebe is an LA real estate agent who, while helping out another agent and friend, ended up blamed for some messed up paperwork. That wouldn't be so bad, but it ended up in a lawsuit. Fortunately it didn't end up in jail time for Phoebe, but she was suspended from her job for a month without pay, and threatened with losing her real estate license. Unhappy that helping someone once again got her in trouble, she swears off doing any more favors for friends. Until her best friend, Maya, asks Phoebe to go along with her as she helps her stepbrothers on their cattle drive. Phoebe is all city girl and pretty sure that it won't go well, but she goes.

When Zane and Phoebe meet, there is definitely attraction between them. But Phoebe has had a couple bad relationships and isn't too eager to start another one. Zane is attracted to Phoebe too, but he's never had much luck trying to talk to women. So he's not very talkative, leading Phoebe to believe he doesn't like her at all. As the cattle drive begins, Zane is mostly focused on making sure everything goes smoothly, but Phoebe turns out to be quite a distraction. I loved seeing Phoebe's enthusiasm once she got going on the cattle drive. I especially loved the conversations she had with the head steer, Manny.

I liked Zane a lot. He's pretty uptight at the beginning, weighed down with the responsibility of the ranch and his brother. Zane has some issues in his past that haunt him, and make him determined that Chase will have it better. Unfortunately, he tends to be hard on Chase because of it, putting their relationship under a lot of strain. He loves his brother, but actually communicating with him doesn't go so well.  I understood his anger at what Chase had done and his determination to make Chase deal with the consequences. Hanging out with Phoebe on the cattle drive opens him up to a new way of looking at his troubles with Chase. It also starts to break down the walls he'd built up around his heart, to protect himself from the extreme emotions he saw in his father. It was fun to see him fighting the feelings that were growing for Phoebe, and failing so completely. I also enjoyed the way that he started to look forward to whatever Phoebe had to say next. I loved seeing the changes she helps bring about in his relationship with Chase.

I liked Phoebe too. Though she works as a realtor in LA, she prefers to help the little guy find the right house rather than dealing with the stars. She lost her parents when she was young and looks forward to the day when she finally has her own family, but that search isn't going so well. She has quite the crush on Zane soon after she meets him. One of the things I liked best about her is the way that she sees past the uptight surface to the guy underneath who is struggling to do the right thing for his brother.

I loved seeing the romance develop between them, as the city girl discovers a love of the country that she didn't expect, and the rancher discovers that love doesn't have to be an emotional mess. Things weren't  perfect between them. Their first kiss was pretty awkward, with bumping noses and being interrupted by a goat, but it gave them both a taste of what could be. As the week went on they began to bring out the best in each other. A storm brings danger to the cattle drivers, but also a new sense of teamwork, and Zane comes to realize just how much Phoebe has come to mean to him. A crisis regarding her real estate license has a new and improved Phoebe returning to LA to deal with it, with support from an amazing variety of people. Even better is a really sweet and romantic moment with Zane.

There is a secondary story dealing with an orphaned brother and sister who are brought on the cattle drive by a pair of temporary foster parents. The children have had it rough and have lost most hope of ever being adopted. The couple are dealing with the discovery that they can never have children, and she is very bitter over the knowledge. She starts out with a pretty bad attitude toward the kids, but things start to change over the week. I thought her feelings were quite realistic and loved the conversations she had with herself as she tried to figure out what her problem was. It was really sweet to see how things worked out for them at the end.

I also loved Chase. He's a really smart kid whose intentions are always good, but things don't work out the way he plans. He loves his brother and hates the feeling that he's constantly a disappointment. I really enjoyed seeing some of the maturing that he did over the week of the cattle drive. It was especially satisfying to see him start to understand Zane's point of view. The scene with the two of them after the storm was really pretty sweet.

There were also a few appearances by regular Fool's Gold residents. Eddie and Gladys are two of the people who signed up for the cattle drive and their antics are pretty funny. They have their typical fascination and commentary about the good-looking cowboys, but they are also wonderful with the two children. There are a few other brief appearances, such as the Strykers, and even Mayor Marsha shows up. There's a subtle lead in to the next book, and I can't wait to read it.