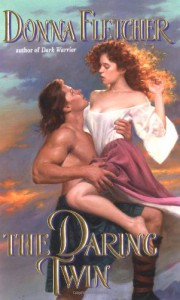 Fiery Fiona MacElder will not marry a man she does not love. Her laird will just have to find another way to merge two powerful Highland clans. Luckily, her identical twin sister shares her outrage. So when the bold warrior Tarr of Hellewyk arrives to claim Fiona as his bride, the sisters stand united, each refusing to divulge the other's true identity.

No battlefield has offered a more daunting challenge than the one Tarr now faces: two stubborn, secretive Scottish beauties and only one who can share his marriage bed. The only solution is to take both home with him until he determines which is his rightful bride. As Fiona's desire grows for this powerful, passionate man she has sworn never to wed, Tarr wonders if the twin he aches for is truly his intended. And in the face of a sensuous deception -- and a dire threat from an unexpected enemy -- will a yearning, loving heart show the way?

Good book with a marriage arrangement that doesn't go quite as planned. Fiona and her sister Aliss are identical twins. When their cousin and laird arranges a marriage between Fiona and another laird, she is furious. She only wants to marry a man she loves and who loves her in return. Aliss is equally outraged, even though she has no plans to marry either. So they decide that they will play up their twinness and refuses to identify which twin is which.

Tarr has chosen Fiona because of her reputation. He wants a wife who is equal to him in strength and courage. He doesn't believe that love has anything to do with marriage. He's not happy over their deception and takes both of them home with him until he can discover which one is Fiona. It turns out to be a bigger challenge than Tarr expected.

The attempts that Fiona and Aliss made to keep Tarr guessing were fantastic. Even though the two women really had different personalities, they were very good at portraying each other. I loved seeing how easily they could slide from one to the other and back again. His frustration at not being able to tell the difference was obvious, especially when he developed an attraction to one of them. He thought it was Fiona, but he couldn't be sure and it made him crazy. Fiona fought her feelings for him because he was clear that his feelings don't involved love. As they got to know each other the feelings got stronger. It was really fun to see Tarr fall without realizing that's what he was doing, though the people around him could see it easily enough.

When the twins' identities were finally revealed, Tarr still had to find a way to convince Fiona to marry him. He was still fighting the idea of love, though he began to suspect that those were indeed his feelings. I really enjoyed seeing the way they got to know each other and discovered just how compatible they were. I especially enjoyed seeing Tarr accept Fiona's abilities and include her, though sometimes under protest, in the plans he made. The attraction between them is really strong and I loved how giving in to it helped bring them closer. I wanted to shake Fiona a few times because of the way she resisted accepting the truth of his feelings once he figured them out. The way he explained things was really pretty sweet for a rough and tough warrior like him. It takes some straight talk from her sister and another to make her realize that it has been her own fears holding her back. I loved seeing them finally come together in full acceptance of their feelings and the realization that their love makes them stronger.

There were also some secondary storylines that complicated their lives. On the journey to Tarr's home they were attacked by members of a clan with whom Tarr has an ongoing disagreement over some land. Their leader is injured and captured, then cared for by Aliss. From the very beginning Raynor is able to tell the two women apart, though he doesn't let on to Tarr. Raynor's story adds an interesting twist to the book, as they discover that he has a very personal interest in the twins. What he has to tell them explains part of their background, but opens up new questions, and shows that they are in danger, though they do not know why. Fiona is taken, and though she is rescued, there are still unanswered questions.

There had been an attack from another enemy, one who seems to have a link to the mystery surrounding the twins. There is talk of confronting this man, but it hasn't been done by the end of the book. I expect that the second book in the duet will answer the questions that have been left hanging.