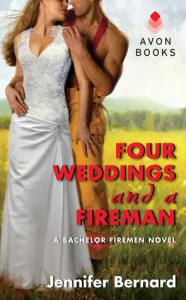 It takes a certain kind of man to stand out among the Bachelor Firemen of San Gabriel.

Firefighter Derek "Vader" Brown is one of a kind -- six feet of solid muscle with the heart of a born hero. It's that protective streak that has him pursuing a promotion to Captain to pay for his mother's home care. And it's why he intends to figure out why his sometime girlfriend Cherie Harper runs hot as hellfire one minute and pushes him away the next.

Cherie's got it bad. Vader sweeps her off her feet -- literally -- and their chemistry is combustible. There's just the little problem of a nightmare from her past she was desperate to escape. And then her sister Trixie arrives, causing havoc for Cherie and the male population of San Gabriel. Cherie doesn't want her past to complicate Vader's life or his career. But there's nothing like a firefighter to break through all your defenses, one smoldering kiss at a time . . .

I've been waiting to read Vader's story and it was definitely worth the wait. In previous books, Vader has been the fun loving one, a bit of a clown, and frequently up to mischief. In this book, we discover that there is more to Vader than meets the eye.

Vader and his girlfriend Cherie have an on-again, off-again relationship. Vader is in love with her and wants her to marry him. Bu every time things start to get serious between them, Cherie pulls back. She tells him she cares, but she doesn't want marriage. He's really tempted to just end the relationship entirely out of frustration, but he can't picture his life without Cherie in it. Cherie is just as much in love with Vader, but she's got trouble in her past that she doesn't want to inflict on him. When her sister Trixie unexpectedly arrives in San Gabriel, that trouble isn't far behind.

I loved Vader. He's always been a fun character, and getting to know him better just made me love him more. Though he's always been the fun guy to his fellow firemen, he has another life that none of them know about. He has been responsible for his handicapped mother since he was fourteen and his father walked out on them. He hasn't told his friends about her because he doesn't want anyone looking at him with pity, but it also means that he has no backup when he needs help. I loved his relationship with his mom. It was loving, but also real, as he had to deal with her opinion of his girlfriend, her desire to see him married, and the complications of taking care of her. Add in his crazy relationship with Cherie and the last thing he needs is more to do. Then someone suggests that he try out for a promotion to Captain and he seriously considers it. It's going to take some serious study time, plus a revamping of his reputation, but it can be done.

I liked Cherie, too. She's strong and independent, and has made something of herself. She grew up in rural Arkansas in a family of thirteen kids, with a seriously whacko father. She and her older brother made their escape, leaving trouble behind them, but always afraid that it would catch up with them. She hasn't told anyone about her past, even Vader. She shares her house with two friends of her brother's, musicians who feel that it is their job to protect Cherie from guys like Vader. Cherie has a tendency to mother them, but she also doesn't let them really interfere in her life. When her sister arrives, Cherie's life becomes even more chaotic, as she tries to keep Trixie out of trouble too.

The relationship between Vader and Cherie is complicated, mostly because of their unwillingness to share their secrets. Vader is so afraid of being pitied that he shuts out the very people who care the most for him. Likewise, if she would just share her past with Vader, she would discover that it isn't as dire as she believes, When a fire at his house brings his worlds crashing together, Vader discovers that far from being pitied, he is admired for his dedication. I loved seeing how it is Cherie that steps in to help Vader and his mother, and how helping them ends up helping her. It was sweet to see Vader's mom helping Cherie deal with her sister. When the truth about Cherie's past finally comes out, Vader is unhappy about not being told before, but his protectiveness and love for Cherie really come to the forefront. Once all the secrets are out, Vader and Cherie can finally look at that future they want together.

As always with the Firemen books, there are places that are laugh out loud funny and others that are truly heartwarming. I loved seeing Cherie teach Vader the tango, and the resulting steam. Some of the antics that Vader and his fellow firefighters get up to are hysterical, such as the episode with the firepole at the bar. Vader and Cherie try to deal with Trixie and the trouble she gets into, with mixed results. There were times when I wondered if she was really that naive, or if she was playing them for her own reasons. The ending was really good with an interesting twist involving their brother. I loved how Vader came through for everyone when trouble showed up, showing that he's much more capable than even he believed.