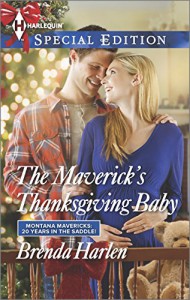 Stop the presses! Can you believe there's about to be another wedding in Rust Creek Falls? Yes, local cowboy Jesse Crawford is tying the knot with Maggie Roarke, that Hollywood lawyer who's been flitting in and out of town for the past several months. Rumor has it their hasty nuptials might have something to do with Maggie's brand-new baby bump…

We're all for one big happy family, but we're a little puzzled by this pairing. Maggie and Jesse couldn't be more different if they tried -- are they really ready to saddle up for the long haul? Stay on the trail, faithful readers, and let's see if their baby-to-be can bring this new family together for the holidays -- and ever after!

Very good book about two extremely different people brought together by chemistry and its consequences. Maggie has been in and out of Rust Creek Falls for several months, working on a controversial court case. The first time Jesse saw her, he wanted to get to know her, but he hasn't been able to summon up the courage to ask her out. He's a bit shy and much more comfortable with animals than people. His latest attempt ended in a tongue-tied disaster, so he gave up, only to get another unexpected chance a few moments later.

Maggie is tired of avoiding the unwelcome attentions of a particular cowboy, and sees Jesse as the perfect rescuer. I loved her first words to him, and the kiss she laid on him was scorching. What happens next is not unexpected. Though she lives in LA, Maggie is not averse to getting to know him a little better. Unfortunately, once she goes home, her busy career interferes with her intention to go back to Rust Creek Falls to see him again. Pretty soon even their phone calls taper off to nothing, and she's afraid that he's forgotten all about her.

Jesse hasn't forgotten a thing, but he's not going to chase after someone who obviously didn't care that much about him to start with. Years ago he'd been engaged to a city woman who ended up leaving him because he and Rust Creek Falls weren't enough for her. He's not going to risk his heart on another woman just like that.

Then a few months later, Maggie is back to deliver some stunning news. She's pregnant and the baby is his. She doesn't expect anything from him, she just felt that he deserved to know. He's shocked, but he's old fashioned enough that he feels the best thing is for them to get married and tells her so. But Maggie is an independent woman and has no desire to be "the right thing". Besides, her life and her job are in LA. Jesse isn't going to give up trying to convince her to stay in Montana.

The first half of the book is spent with Jesse trying to get Maggie to marry him. I liked the way he tried to show her all the good things about the town. He's determined to keep her in Montana, but Maggie doesn't want to give up the job she's worked so hard for to marry a man who has said nothing about caring about her, not just the baby. Maggie likes her job, but because of her pregnancy she finds her priorities changing, and those changes aren't compatible with her work. I loved how she then makes a decision and follows through quickly.

I loved her return to Rust Creek Falls. While she's pretty sure that she has made the right decision, the changes to her life are pretty drastic. Life in Montana isn't nearly as hectic, and though she goes to work for the other lawyer in town it is a whole different way of doing things. I loved seeing her adjust to the slower lifestyle, the interest of her new town in everything she does, and how much she enjoyed having a life outside of work. She still had to deal with Jesse's determination to marry her, but even there it didn't take long before she was considering the possibility. She has accepted her feelings for him, but worries about marrying a man who doesn't feel the same way.

Jesse succeeds in convincing her to marry him, and is looking forward to all that it entails, until several people at the reception have him making comparisons between Maggie and his former fiancee. That same fiancee appears right before the wedding in an attempt to get him back, and when he turns her down, makes snide comments about Maggie being just like her. Then one of her brothers flat out tells Jesse that he's not so sure that Maggie is cut out for life in small town Montana. Even his parents have been less than welcoming to her. Now he's afraid that she won't stick it out, and in order to protect himself he starts to pull back.

I really wanted to shake him and tell him to stop comparing Maggie to Shaelyn, that he's just making both Maggie and himself miserable. The chemistry between them is still burning hot, but he is afraid to give in to it for fear of how much it will hurt when she leaves him. He does everything he can to keep distance between them, but in doing so misses seeing how quickly she is settling into life in Rust Creek Falls, He has a few instances of being the husband he should be, such as during and after the doctor's appointment and ultrasound. He's so sweet there, and adorable at the toy store, but then shuts down again. Poor Maggie is hurt and confused by his mixed signals, and her hopes for a happy marriage start to fade. It was very satisfying to see him realize what an idiot he was being and admit his fears to her. She may have been able to make him work a little harder for her forgiveness, but the ending was very satisfying.