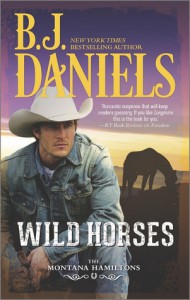 It took only one impulsive moment on an empty two-lane highway to cost her everything.

A man's responsible for his own prosperity -- especially if he's Cooper Barnett, the most determined cowboy in the West. No one knows what he sacrificed to claim a piece of Beartooth, Montana, for himself and his beautiful fiancée, Livie. No one knows what he's willing to do for love…until a stranger's twisted vendetta threatens the happy ending they should've had long ago.

One fateful mistake isn't the only secret Livie Hamilton is keeping from her fiancé. Victimized during a treacherous blizzard by a man she thought she could trust, she's pregnant…but unsure who the father is. With an unknown blackmailer threatening to expose her, she must confess to Cooper and trust he'll still protect her. But when the truth falls into place, she may lose the only man she's ever loved -- or worse.

This was an exciting and complicated book. It starts when Livie, having had an argument with her fiance, Cooper, drives off in a huff into a worsening snowstorm. She ends up driving into a ditch, from which a stranger rescues her. Later we find out that she wakes up naked in bed with no idea how she got there or what happened. Three months later, she's receiving blackmail threats, things are still rocky between her and Cooper, and she's three months pregnant with no idea who the father is. To say that she is in turmoil would be an understatement. She knows she has to tell him, but she's worried about how he'll take it. She loves him and doesn't want to lose him.

Cooper is the head wrangler on Livie's father's ranch. After some rough years as a teenager he pulled his life together and has made something of himself. He's got some land of his own and a few wild mustangs that he's training. He's loved Livie since the first time he met her and sometimes has trouble believing that she loves him too. He knows that people are saying that he's marrying her for her money and is determined to prove them all wrong, to the point where he refuses to accept any of the help that her father offers. It doesn't help that he knows her sisters don't think that he's good enough for her. Ever since their argument back in January, he's had a feeling that there's something wrong, and when she finally tells him he doesn't know what to think.

At this point, both Livie and Cooper are in pain and both are somewhat responsible. Livie should have told him what happened as soon as she got back, instead of pretending everything was fine. She compounded the problem when she didn't tell him about the pregnancy or the blackmail notes, leaving him feeling like she neither loves nor trusts him. On the other hand, if Cooper hadn't been so proud and unwilling to bend even a little, Livie might have felt more comfortable going to him right away. I did like the fact that once he recovered from the shock, Cooper was determined to track down the mysterious man and get to the bottom of the trouble. But it turns out to be more complicated than either expected.

The house she was taken to doesn't belong to the blackmailer, but there may be a connection to the lady of the house. The man turns up in Beartooth, but claims he's not blackmailing her, never slept with her, only drugged her so she could sleep. After the man confronts Livie while she's alone, Cooper goes looking for him. The next day, the man is found dead and Cooper accused of his murder. Adding another layer of stress to the relationship between Cooper and Livie, his former girlfriend wants him back and will do anything to make it happen. One of Livie's rejected suitors also gets in on the action.

Livie's father, Senator Buckmaster Hamilton, has spoiled his six daughters since the death of their mother twenty-two years earlier, trying to make up for her loss by giving them what they want. He married again, but Angelina wasn't interested in being a mother, just advancing her husband's political career. Now that he's a possible candidate for president, she's worried about how all these problems will affect their plans. Things get even more complicated when his first wife, Sarah, turns up, very much alive, but with amnesia. She claims she just wants a chance to get to know her daughters, but people are skeptical. Angelina is furious, but how far is she willing to go to protect her husband's political career?

The tension and surprises just kept building throughout the book. With the problems they were having, I really wasn't sure at the beginning just how good a chance Cooper and Livie had to make a go of their relationship. It wasn't easy, but they did manage to earn back each other's trust, and belief in their future. As for the blackmailer and the murderer, there were several twists that kept me guessing as to who it might be. I had a feeling about the identity, but I couldn't figure out the why and the how until almost the end. There was also a last bit of a threat to Livie's life, where only her ability to stay calm in a crisis kept her safe until Cooper could come to her rescue. While the mystery of the threat to Livie is solved by the end of the book, the questions of Sarah's return carry over into the next book.

I also enjoyed the appearances of various characters from the Beartooth, Montana series, especially Sheriff Frank Curry. He is the lawman in charge of the murder investigation and the questions surrounding Sarah's return from the dead. There is a glimpse into his continuing issue with the young woman who tried to kill him.