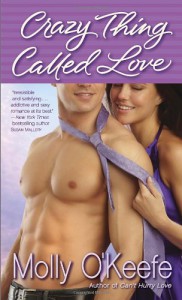 Dallas TV morning show host Madelyn Cornish is poised, perfect, and unflappable, from her glossy smile to her sleek professionalism. No one knows that her iron will guards a shattered heart and memories of a man she’s determined to lock out. Until that man shows up at a morning meeting like a bad dream: Billy Wilkins, sexy hockey superstar in a tailspin -- still skating, still fighting, and still her ex-husband.

Now the producers want this poster child for bad behavior to undergo an on-air makeover, and Billy, who has nothing to lose, agrees to the project. It’s his only chance to get near Maddy again, and to fight for the right things this time around. He believes in the fire in Maddy’s whiskey eyes and the passion that ignites the air between them. This bad-boy heartbreaker wants a last shot to be redeemed by the only thing that matters: Maddy’s love.

Good reunion story. It begins fourteen years in the past, as Maddy and Billy's marriage falls apart and then moves to the present with a few other flashbacks to fill in their backstory.

Maddy is host of a morning TV show, with a reputation of being cool and unflappable. She's worked hard to overcome her past, and shows only her best to the outside world. Her work is her life and everything is going great until one of her producers comes up with a makeover idea for her show.

Billy has continued his hockey career and has gained quite a reputation for his wild behavior. He finally takes it a bit to far and is told by team management that he has to make some changes or he'll find himself off the team. His agent comes up with the idea of a makeover. Billy wants nothing to do with it, until he finds out he'll be on Maddy's show. That's enough to change his mind. Billy has never forgotten Maddy or his love for her. He's grown up some over the last few years and realizes that he made a lot of mistakes during his marriage. He wants a chance to apologize and see if there is anything left between them.

Maddy isn't at all happy with the project. She wants Billy kept firmly in her past. She doesn't want to talk about the past with him, and she definitely doesn't want to get sucked into the drama of his life. She remembers what it was like and still has the emotional scars. She keeps her emotions under very tight control at first because of it. She's very cold toward him, but it's an attempt to hide the attraction she can't deny she still feels for him.

I didn't like Maddy much at the beginning. She was so cold and pretty nasty to Billy that I wondered if there was any chance for them. Even when she admitted that the attraction was still there, she just wanted to use him for sex and not let her emotions get involved. The way she treated him was just terrible. I know she was just trying to protect herself, but it still made me mad. I was happy to see her start to lose some of those walls around her heart in the face of Billy's persistence.

I liked Billy a lot more. He started out as the bad boy of his hockey team, in trouble for his fighting. At the same time, he is starting to see the emptiness of his life and feel the regrets for the things he'd done in the past, especially what happened with Maddy. When he's offered the chance to go on her show, he grabs it. I really liked the way he tried so hard to get Maddy to see how sorry he was for the way he had treated her. He is determined to turn over a new leaf, and become more like the man he thinks she wants.

I loved seeing the makeover process. Though it was hard for him to do it, I loved the way that Billy opened up on the show about some of his past and its influence on the man he is. It was funny and heartbreaking to see the reactions of people to the idea of his makeover. The part with the clothes was pretty amusing.

The building of the new relationship between Billy and Maddy was not an easy one. Billy had to overcome the problems of the past and show Maddy that he really had changed. It wasn't easy for him because he wasn't used to sharing his real feelings. Maddy had to find a way to believe that she could be with him without losing herself the way she had when she was younger. She also had to see that he really had changed. That began to happen the night of the charity function. I loved seeing how hard he was trying to behave, and felt for him as he had to make that speech. Maddy was surprised to see him there, and it was fun to see her try to fight the way he made her feel. I loved the way that his reason for being there had her looking at him differently and beginning to see that he had changed.

When things blew up on the show with the arrival of the two kids, both Maddy and Billy had to deal with a lot of turmoil. I loved the way that Maddy was there to support him and help him through it. I loved seeing that caring side of Billy. This brought the two of them closer together. I loved seeing how each of them handled the kids and what it said about who they were. I loved seeing Billy step up and be something he never expected. And Maddy learned some things about herself that made it possible for her to believe in a future for her and Billy.

I loved the final makeover show and the surprise twist that it took. It was exciting and heartwarming. I also liked the epilogue, which had its own fun bit to it. I liked seeing how everyone was doing a couple years later.

The secondary characters were terrific. I liked Maddy's coworker Ruth and her part in the various makeover details. I enjoyed seeing the changes in her and in the relationship between her and Maddy. I also loved Billy's niece Becky. The things she went through and her wariness were heartbreaking to see. I loved seeing her learn to trust Billy.