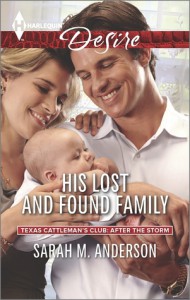 A secret baby brings ex-lovers together in this tale of lost memories and second chances.

Getting hit with divorce papers isn't the fresh beginning Jake Holt wanted with Skye Taylor. But when he returns to their Texas hometown, he finds Skye has a child…and no memory of the couple's painful breakup.

After a long coma, Skye doesn't remember being swept up in a tornado or nearly losing her baby girl. Seeing Jake again rekindles their all-consuming passion. Then she starts to remember… Is their love strong enough to overcome the past so they can become a real family?

Four years earlier, Jake and Skye had run away together. As the children of two feuding families, they were raised to hate each other, but that didn't work for them. They fell in love and managed to keep their relationship a secret for a long time, but when it came out their families were furious. Rather than deal with the hate, they left to make their own life together. The day that the tornado came through Royal, Skye had come to town and been caught in the path of the twister. She was badly injured and her baby was delivered prematurely. Skye herself was in a coma for three months, while her sister Lark cared for the baby (Because of the Baby...).

No one knew where Jake was and why he hadn't been with Skye. His brother Keaton has been trying to find him to tell him what happened. At the beginning of the book, Jake has just arrived in Royal, looking for Skye. He had arrived home from ten months out of the country only to find divorce papers waiting for him. He is stunned to see the damages in Royal, and worried about whether Skye was okay. Thanks to a confrontation with Keaton, he discovers that Skye is in the hospital, having been in a coma, and that he is the father of a daughter. He never knew that Skye had been pregnant,

Jake had never intended to step foot in Royal again. He has spent the last four years building his business, working insane hours and trying to make a better life for himself and Skye. Unfortunately, it also put a strain on their marriage, and they'd had a huge fight before he left on his last job. When he arrives at the hospital he discovers that Skye has a two year gap in her memory and doesn't remember that she had filed for divorce. She thinks that everything is just fine, and her doctor wants her memory to come back on its own. Jake looks at it as the opportunity to repair their relationship. If he can show her how he really feels, maybe things will be okay when her memory does come back.

Skye had been disoriented when she came out of the coma. She didn't remember being pregnant or coming back to Royal. She didn't know why Jake wasn't there with her and why no one would tell her where he was. She was relieved when he arrived and was so happy to see him. Because her doctor didn't want her too far away as she finished recovering, they stayed in Royal. Jake found them a house to live in and he spent his time taking care of her. But something didn't feel right.

The rekindling of their relationship was really interesting. Skye didn't know that there had been anything wrong to start with, as those were the memories that were missing. She likes having Jake around so much, as her last memories were from just as the business started taking off. She behaves the way she did when they were first married, which confuses Jake. She's frustrated by the feeling that there is something going on that she doesn't know about, but she's determined to make the most of their time together. As she starts to get her strength back, bits and pieces of her memory return. Can she trust that the Jake she is seeing now will be the one to stay, or will the workaholic make a return once she is well again?

Jake had been upset to find the divorce papers, as he still loved Skye very much. He had known that things were going wrong with their marriage, but didn't know what to do about it. Finding that Skye has no memory of the breakup of their marriage, he is determined to use the time to fix things. One of the stresses in their marriage had been his refusal to go back to Royal because of the way they had been treated by their parents. On his return, he discovers that the arrival of baby Grace has begun to change his parents' attitudes and that they are far more welcoming than they had been before he left. This removes one of the obstacles to he and Skye getting back together. He also begins to accept that she had had valid complaints about the fact that he worked all the time, putting his work ahead of her and their marriage. Once he makes that connection, he realizes that he has to make changes if he is going to save their marriage. When her returning memory collides with a new business opportunity, Jake has some important choices to make.

The family dynamics were great. We had seen the beginning of the attitude changes by Jake's parents in the previous book, as they got involved with baby Grace. I loved seeing Jake's confusion over those changes when he first saw them again. It takes him awhile to adjust to those changes, and also to seeing his brother with Skye's sister. Skye's parents continue to be a royal pain, and she is stunned by the attitude they still have. They, too, have to learn to let go of the past.